If you spend any time in Newfoundland, chances are good that you’re going to come upon a moose. Though generally docile and shy, these mighty beasts do have their moments, and sometimes an unexpected encounter can get interesting.

Newfoundland has the most concentrated moose population in North America, but they’re not native to the island; they were introduced in 1940 for sport and profit. The accommodations suited them immensely, and they now number in the hundreds of thousands. Given their population and the fact that the Trans Canada Highway runs through vast stretches of forest, human and moose interaction is commonplace here. Those who come specifically in search of moose have an excellent chance of finding one.

Moose have a fondness for hanging about at the roadside, where they can catch a cooling breeze and get a break from the black flies, so you can have a unique wildlife moment just by driving around the island. The highway isn’t the greatest place to make a moose’s acquaintance, but that’s where you’ll see them, standing still in the ditch or at the edge of the trees, and it’s a good time to take your foot off the gas. They may look spindly, but those long legs can move, putting a 1100 lb. speed bump right in your path in a blink. If you hit one, it could be all over…for you and for the moose.

The chances of avoiding/surviving a moose/vehicle collision with one of these 1100 lb. beauties are better if you’re not speeding, so ease up a bit. You’re here to see the place, anyway; what’s the rush? Stay aware. Pay attention to vehicles on the shoulder and to flashing headlights. The former means there might be a moose up ahead, and the latter means there definitely is. Moose blend well into the surroundings and can be difficult to notice while driving, so put your passengers on moose watch. The sooner you spot them, the less chance you’ll be surprised by a big, startled animal, and the easier will be to roll up slowly for a good look and a photograph or two.

Moose aren’t normally aggressive, and you can often get within a few meters of them before they jog away, but there are some circumstances in which it’s best not to make too friendly with these giants. If a cow has her babies with her, you don’t want to get too close. Like any mother, a female moose with her young is apt to be very protective and not a little irritable, and she may charge if she feels threatened. It’s a good idea to keep your distance.

The same can be said for the males during rutting season—mid-September to late October—when the bull moose loses his shyness and becomes curious enough to investigate any noise. While they present a great photo op, it’s best to use the zoom lens to capture the moment.

Moose are solitary creatures, so you won’t see a herd of them lounging about, but you might see several at once feeding at the same location. They tend to be more active in the morning and evening, and that’s when it’s hardest to spot them, so be vigilant and enjoy a safe close encounter with the mighty moose. 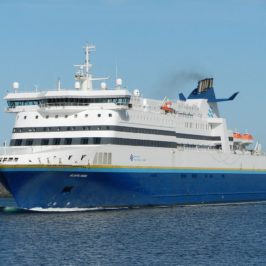 Coming for a visit? You can travel to the island by plane if you choose,...