This is the place where the day first dawns, where whales frolic and stately icebergs drift. This is Cape Spear, the easternmost point in North America.

If you’re looking for history, splendor, majesty, and an uncommon experience, Cape Spear is your destination. From dawn to dusk, a remarkable day awaits you at the place where the land ends.

A Primeval Experience
The dawn of the new millennium happened here first. The dawn of every new day happens here first. A wondrously beautiful place any time, Cape Spear at sunrise is a primeval experience. The sun, it seems, is rising just for you in this place where vast expanses of sky and water meet. As you watch, a great fireball ascends out of a fathomless ocean into a measureless sky. The warm colors of a newborn day slip across the waves and saturate the heavens in primordial yellows, oranges and reds. Then, with a Midas touch, they gild the world around you. It could be the very first sunrise on the very first day, and you’ve had a front row seat.

Show of a Lifetime
You may think you’ve seen the best of it, but Mother Nature hasn’t finished showing off just yet. A splash of movement in the water reveals the presence of the many sea creatures that also find Cape Spear an ideal place to spend time. Dolphins, porpoises, seals and otters all come to frolic in these waters. Keep your eyes trained on the waves and you may even sight your first whale.

The vision of a 36,000 pound humpback is unforgettable. As its massive bulk explodes skyward in a cascade of sparkling seawater, you’re given a glimpse of true majesty, and a moment of sheer awe. For a brief but colossal instant, you witness the play of a giant. A plume of mist from its blowhole salutes you as, with a flick of its gigantic tail, it disappears back into the briny depths.

A little farther on, hundreds of gannets make vertical splash-downs, feathered birds of the air diving deep beneath the waves to catch their dinner. A 10,000 year old iceberg drifts by in the background, in stately and pristine grace, a sail of solid ice glistening white in the morning sun as it makes its way south to parts unknown. Altogether, it may be the show of a lifetime, and once again you’ve had the best seat in the house.

The Light of Life
Now that Nature’s done her best to impress you, it’s time to turn your sight toward the historic Cape Spear lighthouse. Restored to its 1930’s appearance, it’s the oldest lighthouse on the island, and inside you can immerse yourself in the life of a nineteenth century lighthouse operator.

Standing amidst the rough furnishings and authentic tools of the trade, you can just imagine how it must have been to live and work here, braving the constantly howling winds and freezing, gale-driven rain. Picture yourself rising in the coldness of a winter night and treading the wind-blasted, ice-covered catwalk to ensure that the light of life still shines over the dark and treacherous waters.

Knowledgeable guides will tell you that when disaster struck, the light keeper often became the sole hope of rescue for those adrift in the merciless Atlantic. Standing there, you can almost hear his muttered prayer to St. Dunstan, patron saint of lighthouse keepers and—aptly enough on a dark and stormy ocean—of the blind.

A Sublime Ending
By the time you’ve picnicked on the rocks, hiked the winding coastal trails and photographed the captivating flora, dusk is falling. The day ends sublimely on North America’s easternmost point of land, much as it began—with an artist’s palette sky and a feeling of being transported to a time when the world was new. You’ve journeyed to the end of the earth, and you leave awed by the experience. 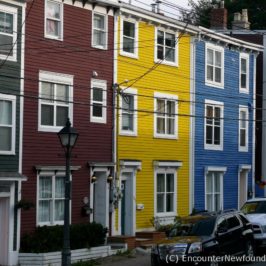 St. John's, Newfoundland, is known for the vibrantly colored row houses that help give the...